the Höchsterhütte - Rifugio Canziani is a mountain hut, mountain cabin, and restaurant at the end of the Ultental Valley. It lies on the left side of the so-called Green Lake, a water mirror owing its peculiar hue to a rare alga species, the only creature able to survive at 8400 feet above sea level all year long, colouring its waters. 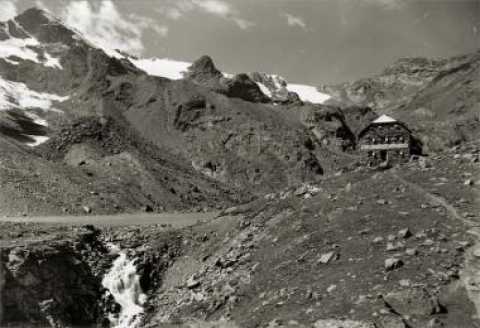 Indeed, the former Höchsterhütte was set under construction in 1909 when the German city of Hochst's Alpinist Association (close to Frankfurt am Main) financed its construction. The then-newly-built, ‘God-forsaken’ hut was thereby named after the city of Höchst, sheltering excursionists coming from all over the area. On the other hand, in 1957 the Italian National Electricity Company, ENEL, bought the site to build a new dam and raise the Green Lake’s water level for producing hydroelectric energy. Thus, the decrepit Höchsterhütte had to be demolished, and was then ‘replaced’ by her new ‘sister’ hut, almost a hundred meters above the original location. As the dam was being completed, the redesigned and modernized Höchsterhütte was purchased by the most-famous Milanese branch of the Italian Alpinist Association, CAI, in 1975: it was the official start or ‘rebirth’ of the Höchsterhütte - Rifugio Canziani as we know it today.

Indeed, the building is located between the Zufritt – Gioveretto Mount (11’280 ft.) and the Sternai – Eggenspizze Peak (11’290 ft.). As a matter of fact, the surrounding mountains make part of the Ortles Group Mountain Range, the former Mount separating the Ultental Valley from the Martello Valley, and the latter Peak dividing Trentino from South Tyrol.

Often, a fresh breeze strokes the hut’s terrace and the tourists enjoying the view from its dining tables. The gentle wind descends from the Eggenspitze – Cima Sternai Glacier, which occupies an area of 0.55 square kilometres; fin some parts it is sixty meters thick.

It could be argued that global warming and greenhouse effects are affecting even the remote Eggenspitze – Sternai Glacier - the predictable consequences being visible to the naked eye. Indeed, following microclimate changes, the above glacier has ‘downsized’ just over the 2005 – 2006 biennium, becoming somewhat 7 feet thinner. This phenomenon does not seem to cease, and its effects to mitigate, either. Therefore, we’d like to point out that global warming is actually happening. And perhaps telling one story from our beloved mountains may convince people in general, and lovers of the Alpine environment, to act more carefully and responsibly toward the environment.

Hopefully I have provided you with some insights; I'd love to see you one day here at the Höchsterhütte!

Dominikus
Head of the Hut